Grow-Bags for a More Global Garden

Most of our Pennsylvania summers lately have been so wet that plants which require well-drained conditions are doomed from the start. About the only way to keep their “feet” out of the water is to place them in containers, so I was happy to be discover that the porous fabric sides of grow bags offer excellent drainage.

Having garnered some unusual flower seeds from an online seed trade last year, I especially wanted to get the blue-eyed African daisy (Arctotis venusta) and Namaqualand daisy (Dimorphotheca sinuata) off the ground. I knew from past experience that those plants were liable to turn to mush if I set them in our soggy clay soil. Granted, I could avoid such issues by only growing species native to my area instead of to an entirely different continent, but where’s the fun in that? 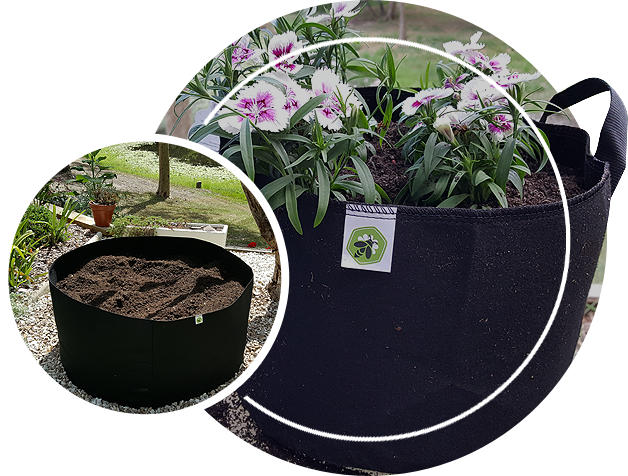 So I filled a grow bag with a light potting mix and placed the seedlings in that instead. Namaqualand daisy, which generally blooms during winter in Africa, seemed to prefer the cooler temperatures of early summer and performed enthusiastically for a while before beginning to fade out after the weather heated up. Its flowers only opened on sunny mornings, which were rarer than a day in June this summer!

Fortunately, the silvery and scalloped foliage of the blue-eyed daisy eventually shot up to a height of about 36 inches, even taller than the size the plant reportedly achieves in the sandier soils of Africa. I’m guessing, though, that it may have had to reach for the light here more than it does there. 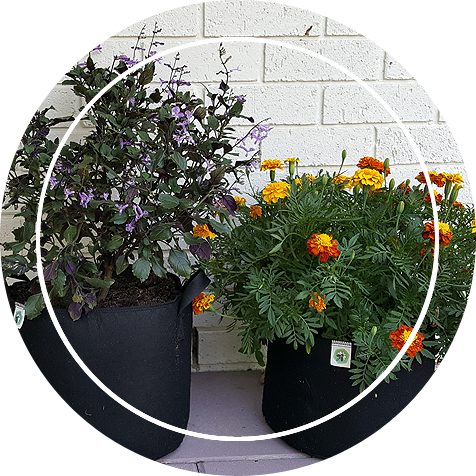 Although foliage that tall did appear gangly in the bag, the flowers are an exquisite mix of blue, mauve, yellow, and white. They also close up shop early, often folding in late afternoon even on sunny days or only partially opening on cloudy ones, but their hues are divine enough to make up for that deficiency.

Since heliotropes hail from the mountains of South America, they too prefer gritty conditions. Although the ones I’d tried previously usually survived in the ground, they didn’t attain much size. However, planted in grow bags, this years’ specimens quickly rose to the occasion, with the tallest having reached 33 inches already—and the season isn’t over yet.

That caused them to tower over the also fragrant petunia and pinks I planted in the bag with the heliotropes. (Perhaps I should have gone with a dwarf heliotrope instead of the original arborescens.) However, the purchased Supertunia ‘Latte’ has spread enough to appear more than the solo plant that it is. And the annual dianthus ‘Black and White Minstrels’ managed to raise its ruffles in the middle.

In yet another grow bag, I placed the Mexican Cuphea ignea and Portulaca umbraticola ‘Toucan Scarlet,’ (probably also originating in Central or South America). Both produced orange-red flowers, though of very different form—separated by the contrasting green and white of the purchased Petunia Ray ‘Pistachio Cream.’   Although the petunia is beginning to get crowded out by the other plants, it was a beautiful friendship while it lasted.

Due to my success with those plants, I definitely have more items that I want to try in the grow bags next summer. Salpiglossis, also a South American native, seldom does well here except in dry summers, and Icelandic poppies—actually native to the tundra of sub polar regions other than Iceland—tend to rot in the ground.

So I’m hoping that the grow bags will make as big a difference for them as they did for the daisies. After all, it seems we Pennsylvania gardeners are going to have to deal with a loves-us-not weather pattern for at least a while longer!